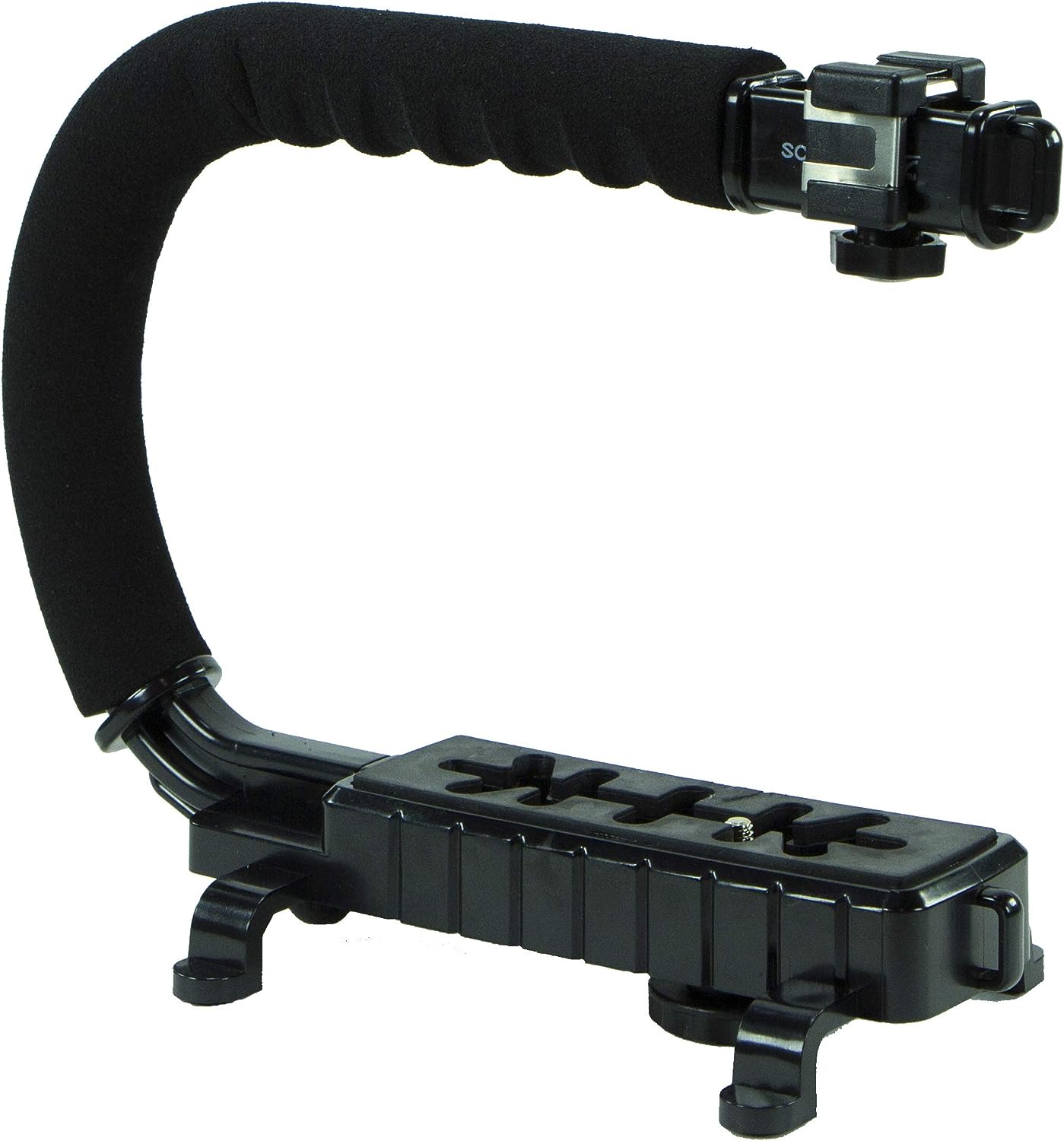 This fits your .
"li" Collapsible Design - Separate the Scorpion JR base from the handle for easy storage in your camera bag. The handle features a comfortable neoprene grip that supports cameras up to 3.5 lbs. "li" Universal Compatibility - Our camera stabilizers fit most cameras, camcorders, DSLRs and mirrorless style cameras with a standard Â¼â-20 threaded mount. The large multi position base plate allows you to find the perfect balance with any camera up to 4.5 pounds "li" Steady Control - The Scorpion Jr. features a custom formulated Neoprene grip that provides steady control and allows the camera operator to confidently float the camera in and out of shots in ways that cannot be done with a bare hand while minimizing shaking and image/video blur "li" Tripod Mountable - A built in Tripod Mount allows the Scorpion JR to be mounted directly to a tripod or any device that supports a Standard 1/4"-20 Tripod Mount.

The Scorpion JR. Triple Shoe Camera Stabilizer is the perfect solution for all your accessory mounting needs. The Triple Shoe Accessory Mount provides plenty of room to mount LED lights Microphones and more in a compact handheld rig. The Scorpion JR Steadicam Camera Handle features a comfortable neoprene grip that supports cameras up to 4.5 lbs. In addition, the Scorpion JR steady cam also features a collapsible design, separate the base from the handle for easy storage in your camera bag.

In the tide of nationalism and revisionism which has marked the last century, our common European Celtic heritage has been systematically deconstructed, manipulated and denied. To balance this phenomenon, the BALKANCELTS organization presents the archaeological, numismatic, linguistic and historical facts pertaining to the Celts in Eastern Europe and Asia-Minor, within the context of the pan-European Celtic culture – a heritage which belongs to no nation, yet is common to all.

Bronze rings from Židovar. One male ring of hammered thick bronze sheet, and female ring of cast bronze engraved with representations of a dolphin, palm branch and standing male figure.

On the other Celtic treasures from Židovar see:

The Celtic Bark shield discovered at Everards Meadows, south of Leicester (England) dates to between 395 and 255 BC

Fascinating article by Vojislav Filipovic of the Serbian Institute of Archaeology which investigates the illegal trade in Celtic artifacts from the Balkans to western Europe, the falsification of official documents facilitating their sale, and the ‘respectable’ western auction houses which ultimately benefit from the destructive, immoral and illegal business of trafficking in our cultural heritage.

Magnificent silver armlets, with coral inlay, looted from the burial of a Celtic lady at Sremska Mitrovica (Srem) in Serbia. In contrast to other parts of Celtic Europe, the serpent is very commonly depicted on Balkan Celtic art, indicating that it had a special religious significance for tribes in this part of Europe.

Inventory of a Balkan Celtic warrior burial excavated at Ajmana, near Kladovo /  Кладово in the Bor district of  eastern Serbia. Grave goods in the (cremation) burial, which dates to the 1st century BC, included metal and ceramic vessels, knives, spears, and a ‘sacrificial’ curved dagger (Sica).

3 gold Celtic finger rings from southern Germany, decorated with fantastic zoomorphic and anthropomorphic compositions – sold in 2017 to private buyers by the British Auction House Christie’s in New York. The religious iconography on such rings strongly suggest that they belonged to Celtic religious leaders / druids.

Rare example of a fully preserved Celtic helmet – from a warrior burial at Giubiasco (Ticino), Switzerland. Such helmets date from the late 4th/early 3rd c. BC, i.e. the period of Celtic expansion into Italy which culminated in the destruction of the Roman army at the Battle of the Allia (18 July 390 BC), and the capture of Rome.

Fascinating narrative scene on a Celtic gold diadem from Mones in Asturias (Spain). The narrative features the themes of resurrection/ rebirth and the transformation of men into birds – a key element of the metempsychosis process and a common theme in Celtic art.

YOU ARE SITE VISITOR: